Keep updated with our response to Coronavirus (COVID-19).

Last week Landau Forte College welcomed European election candidates from all the main political parties  for an animated debate, ahead of this week’s public vote.

The debate featured seven candidates, representing all the main parties in the East Midlands, who are set to contest the European elections on the 23rd May. They included Kate Godfrey of Change UK, Tony Harper of the Conservative Party, Liam McClelland of the Green Party, Tony Tinley of the Labour Party, Lucy Care of the Liberal Democrats, Tracy Knowles of The Brexit Party and Fran Loi of UKIP.

In the lead up to the event, students and teachers spent time discussing the UK’s current position with regard to leaving the EU, why the European election is taking place and what its potential impact might be for us. The Sixth Formers were encouraged to research the political views and manifestos of the candidates attending the debate and come up with questions they would like to put to them.

During the debate itself, the candidates each had their opportunity to set forth their position before inviting questions from the audience. Students asked about a range of topics, including the relationship between the UK and the European Parliament, the role of an MEP and their views on topics such as how leaving the EU would impact on Derby’s high technology manufacturing businesses and how each party would try to address climate change.

Students came away from the debate with a deeper insight into each candidate’s positions on key topics and a better understanding of why their vote in the upcoming election is so important. The event was also a great opportunity for the Sixth Formers to witness a live political debate, with a view to improving their own public speaking skills.

“We were very pleased to host the debate today at the College and would like to thank all of the European election candidates who joined us. Understanding and participating in our country’s democratic decision making progress is key for all our young people, especially at this important time for UK politics.

“The event was of great value in helping to engage Sixth Formers about the upcoming European election and allowing them to put some carefully-considered questions to their regional candidates. We look forward to continuing these crucial discussions around politics and current affairs in the coming months, especially as we approach the election.” 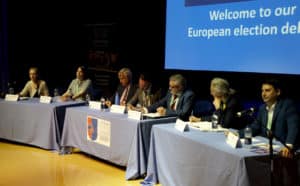